At last the rain has ceased and the sun has come out, albeit for a few days, but coinciding with the start of the nation’s period of self isolation. What bliss for the obsessed beekeeper! I say that tongue in cheek, but of course nature carries on without the side effects of a busy human world as we take time to reflect, meditate and….well who knows. In these first few days the skies are now mainly clear of the jets flying overhead, just the odd cargo plane.

March brings the first days of Spring; the daffodils have been out for a while now, the early flowering fruit trees just opening their flowers, the blackthorn now in flower, and of course the dandelion is happily smiling. I sometimes feel that the dandelion is there just for the bees, as the saying goes once the dandelion flowers the bees shouldn’t starve. It is an oddity of nature that the dandelion although self fertile still provides pollen and nectar.

The warm weather 24th – 26th March (15 deg C) meant that I could have a look inside the hives without fear of them getting chilled, even so I didn’t spend too long looking inside them. I have found that the colonies overwintered in Polyhives have come through better than those in the wooden hives. Of the three small apiaries that I have, the one that is in a sheltered position has a higher level of stronger colonies. One of the poly nucs has a breeder queen and this was bursting with bees. I took this opportunity to move them into a larger brood chamber. In these warm days the bees have been bringing in pollen from several flowering plants as well as nectar. I am still feeding most colonies with fondant and/or pollen patties as the weather is forecast to be cold again for the foreseeable future. However, this short warm period is a wonderful reminder of how the colony very quickly comes to life.

I have been reading through some of the beekeeping books that I have, reminding myself of the period when the bees like to swarm. Swarm control and queen rearing are closely linked, Snelgrove wrote about 24 different ways in which to rear queens, although I shall be using a few again this year, but probably not directly from Snelgrove, ranging from using the Cloake board method to getting a good sized nucleus to raise their own queen. I’ll write more about this later.

One book that I find very much to my liking, being so practical and written in a way that I find easy to follow is: The Complete Handbook of Bee-Keeping by Herbert Mace (the revised version) split into two parts catering for beginner and bee farmer. I’ve been keeping bees for over 10 years, but I do like to remind myself of certain methods relating to swarm management, one in particular is simplicity itself, the Pagden method. This entails putting the newly hived swarm in the same place as the parent hive and moving the parent colony elsewhere. The consequence is that the swarm is reinforced by all the bees flying at the time, for they naturally return to the known spot for at least three days after hiving the swarm becomes stronger. Having been seriously depleted in numbers, the old stock rarely throws a second swarm, but in due course the first queen becomes the new head. It is important to remember the axiom; removing one of these three; the queen, the brood or the flying bees will usually stop bees swarming. The hived swarm has just swarmed, but it has no brood, the parent colony is severely depleted of its flying bees.

Hopefully by next month the world will be in a better place and the weather will have improved too….

The parts and tools for making a frame. 1 topbar, 2 side bars, 2 bottom bars

Fix the side bars to the top bar with two panel pins, one either side 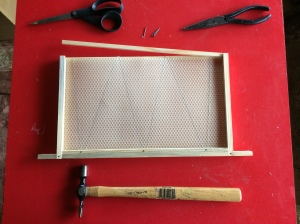 The frames into the brood chamber

Adding screws to strengthen the box

Propolis scraped off the old frames and box

Having removed the old felt, adhesive is added to the top of the roof.

A new sheet of felt is cut and placed onto the roof and tacked into position.

The repaired roof goes back onto the hive.

Moving a colony from a nuc box to a brood chamber. 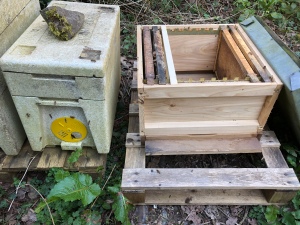 The new brood chamber sitting next to the poly nuc 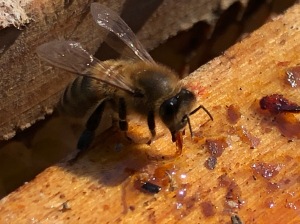 She came and ate a little spilt honey

A worker honeybee on dandelion

Another busy colony in a poly nuc

Chickens and honeybees go well together. Fresh eggs are great.