There’s a melancholic feeling that comes over me with the end of the Hawthorn blossom as it signals the last of the Spring flowering trees, the country lanes lose a lot of colour as spring moves to summer; the bee colonies should have grown at a rapid rate up to the end of May. In June that growth slows right down, but the queen will maintain a steady rate of laying throughout the month of June as the colony builds its stores for winter.

Most beekeepers are aware of what’s flowering around them at any time. They’re in tune with nature. When you first get into beekeeping you start paying more attention to flowers. If you’re not aware you’re always behind the curve playing catch up with the bees. Weeds are no longer weeds as you become aware of their necessity to bees and other pollinators.

There’s often a gap in forage for the bees in June as we wait for the summer honey flowers to come into bloom; clover, bramble, rosebay willowherb…followed by Himalayan Balsam, heather and ivy as summer turns to autumn. I saw a bee on a bramble flower at the end of May and there is clover in the fields this year until it gets cut for silage, so looking like a transition of abundance of forage across the seasons.

A number of days of poor weather have slightly blighted what was a wonderful spring albeit with one blip, a late frost which hit a lot of the small forming fruit. I have been adding supers throughout the month while rearing queens and raising nucleus colonies (nucs). In the last week of June we had a spell of three cold rainy days preceded by four really hot days. I’d put a queen cell, QC, into one colony at the beginning of this week and then checked that it had emerged at the end of it. The supers were much heavier than when I’d taken them off to put the QC into it even with the three cold days.

I read a thesis on the relationship between the beekeeper and the honeybees and recognised all of the anecdotes recorded by the researcher. Being with Bees_ An Anthropological Study on Human-Animal Relations in Southern Beekeeping

My observations and interactions are by sight, smell and touch. I can read a colony by observing the bees around the entrance, or at least I’ll have a good idea. This might be an indication that it has swarmed, or that it is queenless, when there is a queen(s) out mating, when there is a nectar/honey flow, when the bees are not happy or in the case of a nuc when the queen has emerged from the QC. They are indications and I would still need to check inside the hive to be sure.

Of course watching the bees bring in different kinds of pollen can tell us what they foraging on, you may need a microscope to determine the exact flower. Here are a few of my previous posts on pollen identification 1. photo micrography of pollen. 2. Scanning electron microscopy 3. Honey Identification

I can also get messages from the bees by smell, the smell of ripe bananas tells me that they are not happy and you can smell it in a hive that isn’t happy with you going into it. It is also released when a bee stings you which is why you can get stung several times in the same place. The smell of lemongrass from the Nasonov gland in the end of the bees abdomen is to indicate the entrance to the hive. If I re-hive a colony or move the entrance a little in a swarm prevention measure then several bees will wave their abdomen in the air to let the returning foragers and any bees out of the hive where the new entrance is. Lemongrass oil is often used to attract a swarm to a bait hive.

This video shows the bees with their abdomen in the air releasing scent from their Nasonov gland to let the flying bees know where they can find the entrance:

Agitation can be heard amongst bees as their wing pulse increases to become louder and faster. The pitch of buzzing becomes gradually higher as bees become increasingly agitated, and can therefore roughly indicate the current temperament of a hive or individual insect to a beekeeper

When I’m working with a colony it is important not to rush; by moving my hand quickly over the top of the bee frames causes them to fly out onto my hand. The beekeeper learns to slow right down when working with them.

When a colony isn’t happy for some reason, maybe it’s queenless, or if the bees just aren’t that friendly they’ll ‘headbutt’ you or bash into you on purpose. They don’t want to sting you but just warn you not to come any closer. Ignore them and they will start to sting you.

Throughout May and June the beekeeper keeps a close eye on the colony monitoring brood (larvae) health, levels of stores (nectar and honey), making sure the bees have space for brood and to store nectar and honey and what their intentions are to propagate as a colony; what is known as swarming. All being well I am adding honey supers above the brood as this is how the bees manage the hive. Weekly checks into each beehive are necessary if you don’t want the bees to swarm.

The intention of the bees to swarm is indicated by the creation of queen cells; the bees making new queens. If the bees swarm half or more of the bees go to a new location taking the old queen with them which can mean the remaining bees won’t produce much honey. They will swarm around the time that the queen larvae turns to a pupa, referred to as a ‘sealed queen cell’. In reality the larva continues to eat royal jelly in the cell a short time after it is sealed before it spins a cocoon.

The remaining bees continue to service the colony sometimes slowing down a little until the new queen starts to lay eggs. The new virgin queen spends a few days in the hive ‘hardening off’ before going outside to mate with on average 12 drones on a good warm day of 20 degrees or more. She can take 3 to 4 weeks before she starts to lay by which time there’s no brood left which can be disturbing particularly to the new beekeeper who can think that the colony is queenless. The combination of fewer bees and waiting for the queen to start laying takes a large chunk of time out of the already short season. This is the reason why this colony will struggle to store an excess of honey. Better then to manage the swarming instinct somehow as I have mentioned earlier in the year.

A queen can be created from any worker larva usually 1, 2 or sometimes 3 days old. If we look at the whole process of queen creation; the larva hatches out of an egg after about 3 days and then if it is to become a queen its a larva for for 6 days and fed copious amounts of royal jelly and then a pupa for 7 days, a 16 day cycle. So, the bees can use a 3 day old larva which means 10 days before a virgin queen emerges. This is why we have a look roughly weekly to try and catch these queen making times before they swarm.

I have tried several methods of slowing down or stopping the swarming instinct; one is to remove frames of brood either to a box on top of the colony (the Demaree) or take them off and make a nucleus. Also using a swarm board to split them. Both before they make QCs and also after I have found them.

Rather than let the small nucleus make their own queen cells I use a Cloake board method in a very strong colony to make the queens that I can distribute. If the nucleus is strong with lots of young bees I will sometimes let it make a few QCs

At the end of June I have a few colonies that have failed to get a queen mated and so I provide them with a fresh QC and sometimes a frame of mature brood to try and prevent the workers from laying after a long queen absence. The Cloake board method is very useful for this.

I have around 15 new queens mated and laying, mostly in nuc boxes. The days that the queens go out to mate can sometimes look like colonies are getting ready to swarm, it seems to excite all the colonies as the drones come crashing into any and every hive for a refill of honey. And then after a few hours all is quiet and I am left hoping that the queens have mated successfully and returned to their correct hive. I won’t disturb a colony with a new queen for at least 10 days to two weeks after she has emerged and then only for a quick check. This year mating has been about 80% successful, another reason to have QCs handy for those that have failed.

Life with bees is therapeutic, sitting in an apiary any time is a pleasure, the sound of the bees evaporating water from the nectar at the end of the day is such a satisfactory feeling. 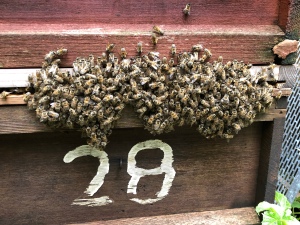 The bees are ‘bearding’ out of the entrance of this hive to which I have a Cloake board fitted. The queen is in the lower box below a QE and there are QCs in the upper box on a cell bar. It is possible the colony wanted to swarm but couldn’t because the queen is trapped below. It was also quite cold and once the weather heated up the bees dispersed and went off foraging again.

The #forgetmenot is flowering and secreting #nectar, much to the delight of the #honeybee. It had the smallest of #pollen grains and as you can see the bees tongue is a tight fit

The #forgetmenot is flowering and secreting #nectar, much to the delight of the #honeybee. It had the smallest of #pollen grains and as you can see the bees tongue is a tight fit
The #pearblossom is two weeks later than last year; still not fully out. It’s being well pollinated as usual. Must be because of the cold start to spring we’ve had.
The Rosemary’s been flowering for quite a while now, late afternoon some #honeybees started foraging on it. See the #pollen on the hairs of the bee perfect for #pollinating.
These photos are of #varroa or #varroamite one is with a dead #bee near by so you can get an idea of the size of it. This is the inspection board from under a hive. The yellow lump is #pollen.
There are #drone #bees in the hives now. See how large his eyes are compared to the #workerbee. His main task will be to mate with a #virginqueen and he’ll need those eyes to see her.
When starting out as a #beekeeper, checking that a colony is #queenright is important to assess the colony situation. However, finding the #queen is sometimes difficult especially when the colony is large.