What are the best plants for bees? A question often asked by people who wish to plant bee friendly plants in their garden, their community or otherwise.

As a beekeeper working with a beekeeping association, education is a major element of the work that we do as volunteers. A honeybee observation hive is always a great attraction for the public, but many people don’t realise that what they see are honeybees, all too often they ask; ‘Are they wasps?’ It is also the case that the bumblebee is all too often mistaken for the honeybee. The observation hive works well with changing the perception of what a honeybee looks like.

In the UK there are 24 species of bumblebee, 224 species of solitary bee and one honeybee species; apis mellifera. This in itself is a fascinating situation, that one species of honeybee has become almost without peer, no competition….

Bees forage for nectar and pollen; the pollen is the male part of the plant that it needs to be carried to the female part of another plant of the same species. A relationship has evolved between plants and pollinators that involves offering the pollinator a reward for picking up the pollen and transporting it to another plant and this is nectar. Honeybees have a particularly sweet tooth more so than bumblebees, so they can sometimes be absent from some bee friendly plants in favour of others. Bumblebees can cope with colder temperatures than honeybees and we will often see a bumblebee out foraging on a cold day. Honeybees have a relatively short tongue compared to some bumblebees which means that they have difficulty gathering nectar from ‘long’ flowers such as purple and white buddleia, red clover and foxglove. That’s not to say that you won’t see them on these flowers particularly if a bumblebee has eaten into the base of the floret or if the flower is particularly full of nectar such that the honey be can reach it with it’s tongue.

Bees collect both nectar and pollen; the pollen you will see on the hind leg of the bee in various colours depending on what plant they have been visiting. Pollen is used as protein, nectar as carbohydrate; bees are vegetarian.

Bees collect many types of pollen as the quality and amount of protein varies from one pollen to the next. (Dave Tarpy’s video on the biology of honey bee nutrition explains more about the importance of nectar and the protein content of pollen) and they will fly up to 3 miles or 5 km from the hive to forage.

Research carried out in Northern Spain on the protein-levels-of-pollen  showed that the pollen with highest protein levels were; Blackthorn, Willow, Broom, Oak, Crocus, Buttercup and Grasses. The higher the protein level the higher the quality which is vital for brood and queen rearing.

Research at both Sussex University and at the Botanical Gardens of Wales shows us that bees will fly over large areas of flowering plants to reach hedgerow plants and trees. That is not to say that they don’t visit anything other than these wild flowers but it implies that they prefer them. The Botanical Gardens also analysed 20 different honeys from across Wales and the amount of pollen varied a great deal in the honeys. The bees do collect a wide and varied range of pollen, however, most honey comes from the nectar of a few plants. These are listed below with the reason being that they are the most abundant. They are mostly trees and weeds with a few exceptions usually those plants planted on a large scale as a food source for us e.g. Oil Seed Rape. Trees are important sources of forage for bees from early Spring when collecting pollen from willow, hazel and others that rely on wind pollination. Trees can also provide enough nectar for the bees to store as honey, a large tree can provide as much forage as an acre of flowers.

Bees need pollen and nectar sources from early in Spring to late in the autumn, there is also often a ‘gap’ in forage which can fall in June which beekeepers call the ‘June gap’. For this reason planting bee friendly flowers and shrubs that flower in June can be highly beneficial.

Francis Ratnieks of Sussex University points out that in Britain as a country we have a higher than average urban area of around 10% of the country and we also have around 20 million gardeners many of whom live in these urban areas. If many of us planted more bee friendly plants then this would surely benefit bees not only in urban areas but areas that border the urban areas.

So here is list of some plants taken from ‘Plants for Honeybees’ by F.N.Howe.

I have also listed the main pollen and nectar providers across a typical year for the area of Breconshire in which I live and keep bees. Plants for Honey Bees – Chris Cardew October 2013 – Sheet1

Howe has a section on Garden Flowers and the honey bee with sections as following categories:

Important to note that most garden annuals are not happy unless sown in full sunshine.

Among the early spring flowers so useful in supplying fresh pollen and perhaps a little nectar to the hive after the long winter months, certain bulbous and tuberous plants are very welcome.

None of the above are likely to be sufficiently abundant to affect the honey yield. They will happily grow well in shrubberies, under trees, on the edge of lawns requiring little attention and not competing with other plants.

Some vegetables are harvested before they flower such as radishes, turnips, swedes, cabbage, cauliflower, kale and other Brassicas, onions, leeks, chives, carrots, parsnips, chicory and endive. Quite often seen in flower some some reason or another and if the gardener is growing them for seed.

Other vegetables, which flower during their normal lifespan in the vegetable garden, and which attract bees are asparagus, marrows, pumpkins, cucumbers or other gourds and broadbeans.

Many culinary and medicinal herbs are good nectar plants and provide useful bee forage when grown in large pots. These include; mint, sage, thyme, margoram, hyssop, savoury and basil. Lavendar, rosemary, horehound and catnip can also be added.

This is often a big surprise to people, that so few plants provide enough nectar for the bees to produce honey. It stands to reason that of course bees visit so many other plants and their nectar will be included, but it will be such a minority in the honey as a whole. When analysing honey under a microscope we can spot the various pollen grains from the many plants that the bees have visited. Sometimes it is possible to find a large majority of one kind of pollen such as heather, hawthorn and lime, but mostly it will be a mixture such that we call the honey ‘Wild flower’.

Other Plants visited by the Honey Bee many for pollen only;

N.B. August 7th 2017 I was walking through the Botanical gardens at Singleton in Swansea SA2 8PP. I walked past a tree in full bloom, lovely little white flowers and then I heard what sounded like a swarm in the upper reaches of the tree. There were many honeybees foraging on the flowers of this tree. It is a Chilean Myrtle also known as Luma Apiculata. 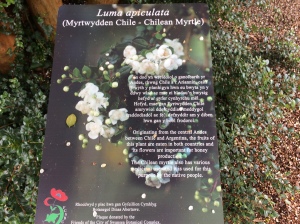 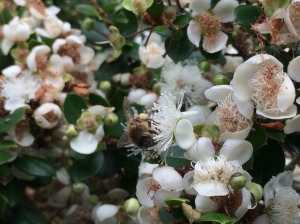 The following are notes taken from a lecture that Francis made at Llangadog on 14th May 2016 and is based on his teams research at Sussex University.

Clover used to be grown to give nitrogen back to the soil. It has now been replaced by chemical fertilisers.

Bees travel further as the season progresses with observations showing a distance of around 1km in Spring leading up to 3-5km in summer, then less again in autumn.

Of the 246 varieties of Aster only a few are attractive to insects. Helenium ‘The Bishop’ was found to be very attractive when researchers visited garden centres. Salvis ‘Mystic Spires’ and Sedum also found to be attractive. Urban and rural areas are equally visited by bees. Pasture and field margins are the best for forage by honey bees. Bramble, Hogweed, Ragwort, Black Knapweed, Thistle. Oil Seed Rape, OSR is not visited by bees if more than 1.5km away from the hive with Dandelion being most important as a pollen source even if OSR is close by. In Sussex 90% of the pollen collected in autumn was from Ivy.

Natasha listed the following plants as being especially good for bees:

When analysing honey of the colonies around Wales only one type of pollen was found in every sample and that was Quercus (Oak). Why Oak? English oak is a host for so many animals and it is thought that honeybees will collect honeydew from insects. In my opinion the main reason to collect oak pollen is that it is rich in protein with well over 25% protein.

When given a choice of 88 plants at the gardens the bees flew over them all to collect gorse and acer.

2 thoughts on “What are the best plants for bees?”